As an organization, SOS was founded to re-distribute medical surplus to medically impoverished communities around the world. As COVID-19 has turned our eyes to our local community, our hearts remain focused on the millions around the world that do not have the medical care we receive here.

During our local response to COVID-19, we have continued to ship critically needed medical supplies internationally – sending 8 container shipments to facilities across Africa and Southeast 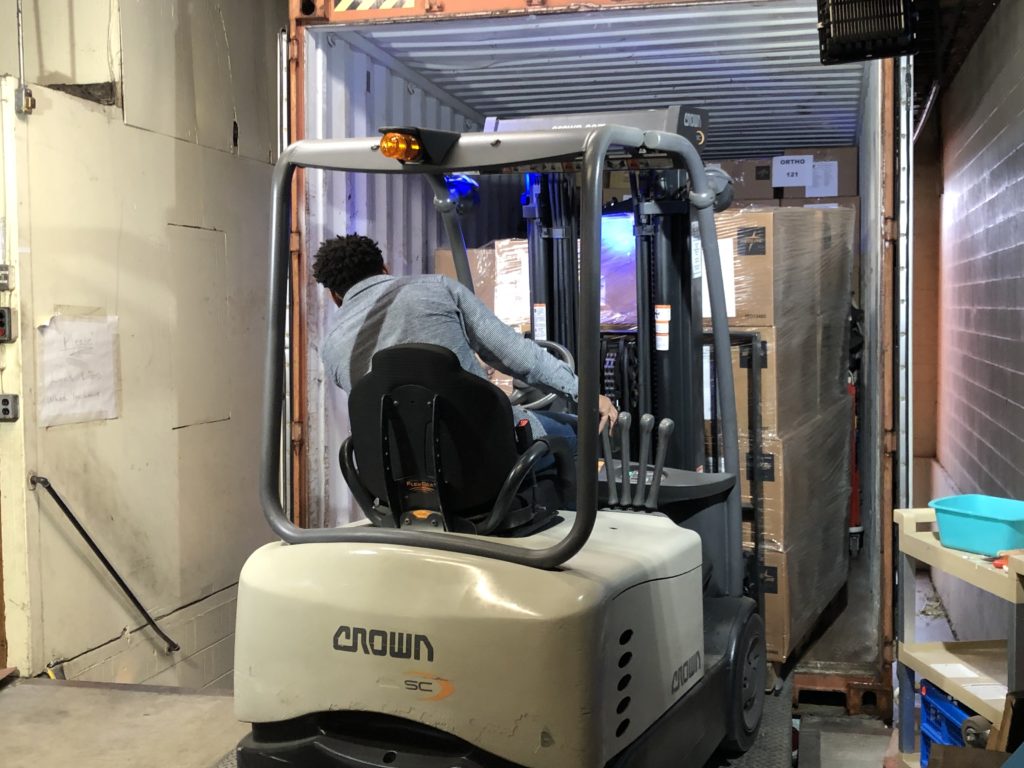 Asia. Our shipments have supplied mobility clinics in Eswatini (formerly Swaziland), missionary hospitals in India, mobile clinics in Liberia and teaching hospitals in DR Congo. In Eswatini, our shipment has provided wheelchairs for the disabled. Ignored by society and only cared for by family – they can now have the mobility devices that provide accessibility and freedom. In DR Congo, our shipment will provide equipment for overburdened hospitals, and also provide tools to train a new generation of nurses, midwives and doctors. While we have been focused on our crisis at home, we must not forget those around the world who face health crises daily.

Our first container sent in 2020 went to Liberia where it supplied three clinics near the capital city of Monrovia. Our container shipment to Liberia in 2014 was designed to combat the Ebola crisis and this 2020 shipment re-supplied the same facilities. Working with the Trembo National Association, a nationwide group of Liberians living in the U.S., SOS has now provided hundreds of equipment pieces that provide quality care, general surgeries as well as maternal and neo-natal services. Harry Kpoh, a Louisville, KY resident and member of the Trembo National Association, traveled with the container to Liberia to see it arrive and the supplies distributed. The news story below, originally posted by Front Page Africa, shares Harry’s journey with the container and the impact created from SOS’s shipments.

“Monrovia – Southeastern humanitarian group, Trembo National Development Association (TRENAA), has launched a medical container project, following the arrival of a US$250,000 medical and food items in Liberia.At the launch of the project Tuesday, March 24, in New Matadi, Monrovia, Harry Kpoh, Project Coordinator said the project would provide medical equipment and supplies as well as high protein food to various health facilities in Monrovia and Grand Kru County.“TRENAA has partnered with organizations including Supplies Oversea, Catholic Medical Mission Board and Love The Hungry and others that provided medicines, medical equipment and high protein for the residents of Liberia, especially Grand Kru Count,” Kpoh averred.The items arrived in Liberia just within a time when the country is fighting to contain the deadly coronavirus pandemic.He said some of the equipment will be donated to government for the fight of COVID-19, while about 8,000 residents are also expected to benefit from the items which arrived in a 40 feet container.Mr. Kpoh noted that the project is the second of its kind in Liberia aimed at helping address medical needs of citizens.“This is the second of many distributions of such kind to come. In 2014, the Liberian Community in Kentucky and Southern Indiana sent a 40 feet container of medical equipment and supplies to help buttress effort of the Liberia Government during the Ebola crisis,” Mr. Kpoh added.Mr. Kpoh clarified that the donation does not have any political motive, but intended to help people of his homeland and Liberia at large address held need.He further stated that the items were donated by charitable organizations and other humanitarian groups in the United States of America.Mr. Kpoh said his decision to come back to Liberia on such mission was predicated on the fragile health sector of Liberia that was exposed by the Ebola crisis.For her part, the association’s coordinator in Liberia Faith Joyce Keneah, said the association believes Liberians need to benefit from others in the diaspora.Madam Keneah maintained that the first set of donations will be made at the John F. Kennedy Medical Center on Wednesday, March 24.The TRENAA National Coordinator is urging institutions that will benefit from the donation to use it for the intended purpose.”